Based in Tooele County, Utah, Grantsville is one of the more popular cities in the county and the second most popular city in Utah. It is associated with the Metropolitan statistical area in Salt Lake City. The city has grown rather slowly yet steadily since 1848. But more recently it has experienced a more rapid growth increase in the 1970s as well as in the 1990s. This spike in growth was primarily due to two development factors: one being the development of the Deseret Peak Recreational Center that is located in the nearby area, as well as the Miller Motorsports Park Raceway, along with the development of the local Walmart Distribution Center, which is strategically located just right outside of the area.

There is a population of 9,379 according to 2012 reports provided by the US Census Bureau. This town has a bedroom community that is convenient for individuals known to commute frequently into the Salt Lake Valley area.

Bordered by South Mountain, Stansbury Island, the Oquirrh Mountains, the Great Salt Lake and the Stansbury Mountains, its climate is very hot during the summer and very cold and snowy during the winter months. 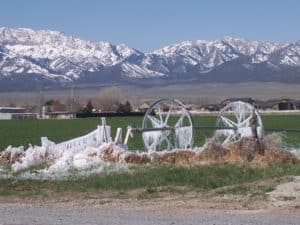 There are also several historic landmarks in the area as well. They include the Anderson-Clark Farmstead, the Hilda Erickson House, and the Grantsville First Ward Meetinghouse to name a few.

The Anderson–Clark Farmstead, is referred to as the J. Reuben Clark Farm. This landmark was built in 1941 and sits on 3.2 acres of land and consists of 13 contributing buildings. Its historic significance is based on its affiliation with the Grantsville’s agricultural development that is associated with both the Anderson and the Clark families who were responsible for their “distinctive collection of agricultural outbuildings”.

The Hilda Erickson House was built for Hilda Erickson in 1915. She was considered a very long-lived woman who dwelt among the original pioneers in Utah. Her son, Perry Erickson built the house which is historically known for its association with Hilda Anderson Erickson and her travels made to Utah in 1866 by wagon. She lived in the house until she was over 100 years old. Out of roughly 80,000 pioneers that migrated to Utah prior to the railroad, she was the last living pioneer. She later died in the year of 1968 at 108 years old.

Built during the years of 1865 to 1866, the Grantsville First Ward Meetinghouse, was a latter-day St. meeting house developed by Hugh Alexander Ross Gillespie, a Scottish immigrant. It is one of few LDS meetinghouses that was built with Adobe and having its vestry attached to the rear of the house as opposed to the front of the meetinghouse.

There are plenty of things to do in this amazing city. This includes recreational activities that can take place at the Spruce Forest Artisan Village, the New Germany State Park or the Casselman River Bridge State Park. For those who enjoy shopping, the Hill Top Fruit Market or the Gift & Specialty Shops may be just perfect for you. For entertainment, you may consider Music at Penn Alps or a Theater.

The schools within the area are made up of a total of four public schools. Together they serve 2,688 students combined. These four schools include one high school, one middle school, and two elementary schools. It also has one pre-K school in the area. It is their only public preschool within the immediate area and serves a total of 809 students. Each of these schools is located within the Tooele County School District.

Grantsville’s total houses that were identified was 1,973. Of that, 1,851 was occupied. There was 2,404 owner occupied homes and 543 homes or units that were renter occupied. 18% of the residential occupancy in this city area are renters and 31% are renters on a statewide basis.

For more information about home sales in the area, please contact us today.

Our property management team specializes in residential areas throughout Grantsville, UT. We offer multiple services to take your rental property and convert it into reliable income. We have a thorough screening process that helps to identify the right tenants for your property. Our team works hard to keep both parties happy through effective communication, bullet proof lease agreements, and timely monthly rent collection. We offer maintenance services to enhance the property and ensure that it will retain or increase in value. We oversee everything, allowing you to sit back and relax and know that your property and your tenants are in good hands.

Contact us today if you are ready to receive a comprehensive analysis of your rental property and to inquire about our Grantsville area property management services.

Tooele property management experts. Focusing on maximizing your profits and maintaining your rental property with our award winning services.